If you are not familiar with the Olivet Discourse spoken by Jesus in Matthew 24, echoed in Mark 13, and the similar teaching in Luke 21, we highly recommend Chuck Missler’s intense exposition into the commentary, where he thoroughly explains and summarizes the passages in their entirety: https://www.youtube.com/watch?v=go_JaZhY93Y 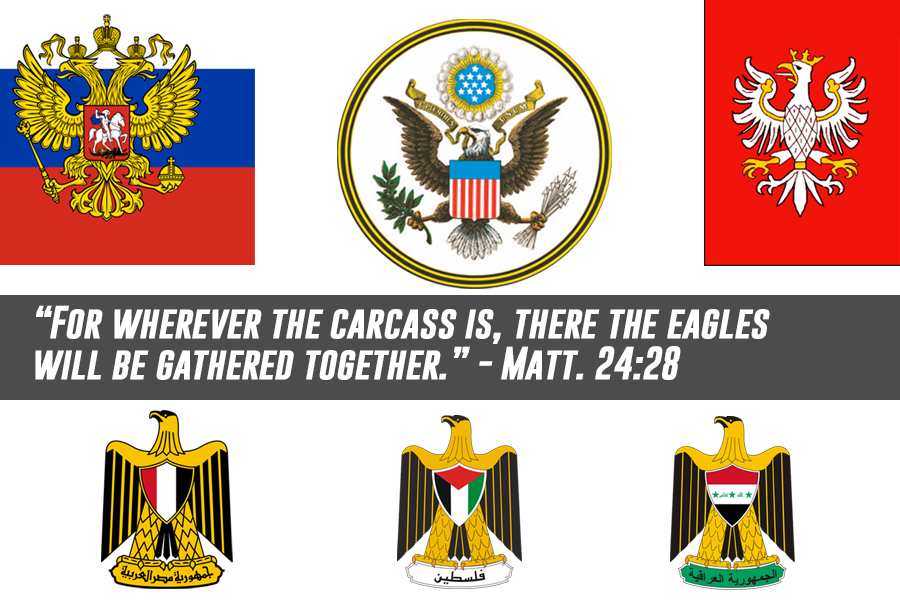 A strange and interesting prophecy is uttered by Jesus in Matthew 24:28, that has been the subject of much scholarly debate and conjecture: “For wherever the carcass is, there the eagles will be gathered together.” (NKJV). This is spoken in the midst of Christ prophesying concerning the last days and the gathering of His people. The immediately preceding verse, Matthew 24:27, often gets conflated into this one: “For as the lightning comes from the east and flashes to the west, so also will the coming of the Son of Man be.” (NKJV). And it is immediately following verse 28, where Jesus proclaims, “Immediately after the tribulation of those days the sun will be darkened, and the moon will not give its light; the stars will fall from heaven, and the powers of the heavens will be shaken. – Matthew 24:29 (NKJV). But what is verse 28 referring to exactly?

Many scholars offer the idea that since it is surrounded by the appearing of Jesus, that somehow He is the carcass and His people are the eagles. This doesn’t settle well however, because how can the living Son of God be the carcass? He is the Bread of Life, the Living Water, and is certainly not a carcass. Also, a careful examination of the passage reveals that Christ doesn’t actually return until verse 30, after the signs in the heavens. Verse 27 was uttered as a response to verse 26 warning of false Christs and for us to not believe it, since the coming of the Lord will not be a localized or secret process, but one viewed in the sky all over the world.

Another very curious element to the mystery verse is the use of eagles as gathering where the carcass is. Eagles are not carrion birds! Eagles hunt live prey and do not consume dead, rotting flesh such as vultures and the like. Some scholars realize this, and try and force vulture or a similar carrion bird into the context, ignoring the actual specific and literal original Greek word ἀετός (aetos), which translates plainly, “eagle”. The Greek language is known as one of the most precise languages known to man, and certainly would not allow for the conflation of two entirely different creatures in one word no more than English would. Our language doesn’t allow for an eagle to be be described interchangeably with a vulture, so why would it in Greek, a much more precise language?

Understanding this, we must accept the usage of the word eagle, and simply grasp the idea of an eagle going against its very nature and gathering where there is dead, rotting flesh. But what is this referring to exactly? One of the most mysterious issues concerning the Olivet Discourse is that for whatever reason, the Lord sees to it to bounce around the timeline in many instances, not presenting a flowing consecutive series of events. In one sentence He will refer to something occurring after something, and in the next breath, something else occurring before. So we cannot assume that the passage in question simply attaches itself to the ideas presented in the surrounding text.

It is interesting to study the symbology of the eagle. Often, eagles were actually used to depict enemies of Israel. One of the original 12 tribes of Israel, and the largest tribe in fact, the tribe of Dan, originally had the symbol of a serpent, but migrated far north and away from the rest of Israel, adopting the eagle as its standard instead. Their eventual migration led them further west as well, eventually into what is Europe today. It is striking to note the eagle symbology in the great monarchies and families of Europe, leading all the way to the iron eagle of the Nazi party, and of course the eagle of the United States of America which broke off of Europe in its founding.

Let us interject here the original Greek of another one of the prime words used in the passage. The word “carcass” is translated from πτῶμα (ptōma), which means a corpse; but interestingly also means “fallen, downfall, and that which has fallen”. We know from scripture that Satan is described as “the fallen one”. Could the carcass of Matthew 24:28 not at all be referring to the appearing of Christ, but of the literal gathering of the nations symbolized at different times in history as eagles aligning with the fallen one and death? This writer believes so.

In verse 31, Jesus is describing the gathering of the elect from the four winds at the sound of the angel’s trumpet, so why would they be earlier described as eagles gathering against their nature to a dead and rotting fallen corpse? It becomes quite apparent, that the flow and context of the passage is right there in front of us. The armies of Satan, symbolized as eagles, are gathering at the carcass, symbolic of death and the fallen, for battle against Israel and the Most High God. It is then the heavens tremble, the Son of Man appears in the clouds, and His armies are gathered. This beautiful example of Hebraic prophesy evident in the passage doesn’t stop there. Since eagles are not carrion birds, they are clearly violating their nature and intended purpose. One can envision the United States as being part of this dark coalition against Israel, who once was a proud supporter and ally of the Hebrew people. It is our belief that America was granted such success, liberty, and blessing in such a short timespan of history due to its support of the nation of Israel, and we believe the U.S. has actually been called by God as a steward and protector of her. To violate that sacred position and align against her would certainly be an unnatural position, and would qualify as an eagle being attracted to carrion.

This is of course, all conjecture. There are many teachings on this subject, and there may even be a similar position as the one presented here out there for study. We are not aware of such a teaching however, and fully believe in the clarity of this description. As we study the Word of God, and especially when it is explained and unlocked by gifted and anointed scholars such as Chuck Missler, Doug Hamp, and others; a warm, refreshing, and peaceful feeling seems to dwell in our spirit when we finally understand passages that were previously mysteries to us. This is the moving of the Holy Spirit as we draw close to the Lord through His Word. Conventional explanations of Matthew 24:28 never achieved this settling in my spirit however. It was a source of mystery and at times avoidance, due to its ambiguity. However, in really studying and praying over this particular passage, these explanations we believe to be revealed by the Holy Spirit, and finally settled deep in our spirit as only the Living Word can.That in no way means that we believe interpretation is closed on the subject. In fact, quite the opposite, as we encourage you to pray and study as well; and may the Holy Spirit reveal His truth through His Word to you as well.