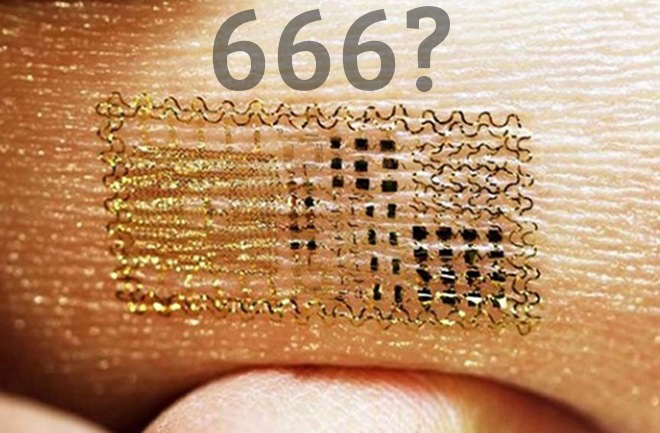 The prophetic and chilling words in the Bible regarding the mark of the beast peers into the future and spells out what lies in store for those alive during the time of the Tribulation in Revelation 13:16-18:

“And he causes all, the small and the great, and the rich and the poor, and the free men and the slaves, to be given a mark on their right hand or on their forehead, and he provides that no one will be able to buy or to sell, except the one who has the mark, either the name of the beast or the number of his name.

Here is wisdom. Let him who has understanding calculate the number of the beast, for it is the number of a man: His number is 666.“

For centuries, man has attempted to understand these passages and their application within their lifetime. However, it wasn’t until recent years that advanced innovation has yielded technological devices in the biomedical field using nanotechnology that could truly fit within the context recorded in the book of Revelation.

For the past several years, the primary focus has been on micro RFID chips implanted into the skin that can do everything from monitor blood pressure to conduct complex financial transactions as being the potential and even probable mark of the beast. However, the only visible “mark” evident with these devices would be a tiny scar at the point of incision. The Bible clearly details a mark so specific, that a minuscule fragment of healed scar tissue simply wouldn’t cut it.

A new candidate has arrived, and one that is garnering praise and attention worldwide as the next innovative breakthrough. More noticeably, hardly anyone is even talking about its potential as the mark of Revelation 13.  These devices are known as electronic tattoos. Made out of flexible silicon and rubber, the tattoo is applied in a similar way as a temporary tattoo, and is completely non-invasive and pain free. People around the world, Christians included, are so focused on its application as a biomedical savior that can handle everything from giving you a weather report, to monitoring and adjusting blood sugar levels, and just about any other practical function for a modern world.

It needs to be stated that too many good intentioned people that author blogs and media concerning eschatological issues often make the mistake of being overly prognostic in their presentations. It is not this writer’s intent to definitively proclaim that these devices are in fact the vehicle for the mark of the beast, but rather to explore the possibilities, and highlight the similarities to the ancient text in Revelation.

The difference in these devices and the RFID microchip, is that these devices are highly visible on the surface of the skin, and virtually any design can be used to cloak its very electronic look. One can easily imagine a design that somehow equates to the number of the beast being the required mark that all of mankind must accept at the hand of their new world leader.

As this device continues to be improved, the tech community is alive with praise and wonder as to its application. Mike Elgan, writing for ComputerWorld.com says in this article, “The concept sounds simultaneously futuristic and bizarre. But mark my words: You’ll get one. And sooner than you think.” He goes on to say rather enthusiastically, “It will start out with primarily medical uses, then evolve into a cyborg-like capability of melding human flesh with electronic sensors and communication”.

This video by the National Science Foundation explains the potential medical and healthcare application of the device: http://youtu.be/4oeFBGFzcrg.

The latest gadget buzzword is “wearable tech”, and Google is blazing the trail in this sector, starting with its one of a kind product Google Glass, that allows people to use the internet, communicate with other people, and observe data about their surroundings in real time through a prism screen connected to eyewear. The display is simply overlaid on the glasses’ lenses, making one’s field of vision their computer screen. In a continuation of Google’s innovation in wearable tech, the company has recently obtained a patent for electronic tattoos that are applied to the throat. A CNN article explains the device here:

The patent says the tattoo would communicate with smartphones, gaming devices, tablets and wearable tech like Google Glass via a Bluetooth-style connection and would include a microphone and power source. The idea is that wearers could communicate with their devices via voice commands without having to wear an earpiece or the the Glass headset.

And how’s this for future tech? It could even be used as a lie detector.

A recent Discovery News article even lauds electronic tattoos as potentially “invaluable” in monitoring babies vital statistics, among other medical uses. Leslie Saxon, chief of the division of cardiovascular medicine at the University of Southern California’s Keck School of Medicine, says:

A baby born five to 10 years from now in a developed country may get a tattoo not long after her first feeding. It would be an integrated circuit, a discreet and flexible affair, smaller than a postage stamp and probably placed on the chest. It would monitor such biometric parameters as electrocardiogram (EKG), physical activity, nutritional status, sleep duration, breathing rate, body temperature, and hydration.

Saxon, speaking at the Technology for Humanity conference, says that these devices are only effective if people are “using machines to amplify their humanity, not to scare the heck out of them”. An additional component that would interact with the electronic tattoo for certain functions

…will be tiny, ingestible sensors, which will be taken with pills. The sensors will affirm that a patient has taken a correct dosage, and then monitor physiological reactions to the dose, enabling doctors to fine-tune it.

Saxon, seeing the potential for abuse and the compromising of one’s most personal data, assures that such concerns could be alleviated with the creation of a “virtual United Nations” that would police and monitor for illicit use of one’s information.

In past discussions concerning the potential mark of the beast, many jump to the immediate conclusion of jackbooted paramilitary thugs strapping folks to hospital beds and implanting their bodies with the mark. However, the Bible makes it clear that people will voluntarily receive it. This has perplexed many who wonder how such a thing would be desired and wanted by a population that has certainly at least heard of the most diabolical number of all, 666. But what is becoming increasingly clear, is that these devices are being rolled out as the “next big thing”. Consumers flock to the nearest electronics store and e-commerce tech site every time a new gadget is launched, and do whatever it takes to be one of the first to obtain it. Like a type of 21st century take on “keeping up with the Joneses”, millions of people are consumed with the latest invention that will supposedly make their lives more convenient, comfortable, or stress-free. The mark of the beast will certainly be a status symbol, a type of declaration to the world that one is ahead of the times and subscribes to the latest technology. It will certainly be a device that offers many perks to a population always concerned with the quickest access to entertainment, media, and culture. As stated above, it will have healthcare implications. It may be presented as the cure-all magic bullet that can diagnose any disease ahead of doctors, and instantly eradicate it before it spreads. No more Nazi-like armies of enforcers stamping people with their brand – people will WANT this device; at least initially.

In any discussion regarding the mark of the beast, the undertone is sinister. The Bible clearly states in Revelation 13 that those who receive the mark of the beast will not and cannot be saved, but will cast into the Lake of Fire. This author subscribes to the idea along with several other eschatologists, that this is clearly saying that one who receives the mark is not only denied eternal life by the perfect judgment of God Almighty, but is incapable of claiming the salvation of Jesus Christ due to their loss of their humanity. A deep study into the biblical book of Ruth reveals the idea of a kinsman redeemer, and mirrors the salvation offered through the blood of Christ. We, as humans, are able to be saved because Christ came to Earth as a man, like all of us, and offered Himself as a perfect unblemished sacrifice. He became our kinsman through His becoming a man, and therefore could take man’s punishment for man’s sin in his place. It is believed by some, including this author, that the mark of the beast will physically alter one’s DNA in such a way that their humanity is compromised at its very foundation, and will therefore have no kinsman redeemer in Jesus Christ. They literally have compromised their qualification for being saved by the blood of Christ – their humanity.

Chapter 13 of Revelation offers another interesting passage in verse 15, “He was granted power to give breath to the image of the beast, that the image of the beast should both speak and cause as many as would not worship the image of the beast to be killed”. This passage reads as a very technological description. How can an “image” cause anything, kill anything, or make people do certain things? The answer is that as one’s DNA is altered through these devices, people can literally be programmed in any way their masters deem. The tribulation saints who have not received the mark will be easy to spot, as they are not under the control of the device or the image. They will summarily be rounded up and executed as martyrs unto Christ Jesus our Lord.

In the midst of all of these things unfolding daily, let us not forget Romans 12:2, “And do not be conformed to this world, but be transformed by the renewing of your mind, so that you may prove what the will of God is, that which is good and acceptable and perfect”. Our mission is to spread the good news of the gospel of Jesus Christ, and through the Holy Spirit, His truth will be revealed. There is much chaos in the world, and we are informed that much more is to follow. But praise the Lord! These things must come to pass as Christ told us in Luke 21:28, “Now when these things begin to take place, straighten up and raise your heads, because your redemption is drawing near”.