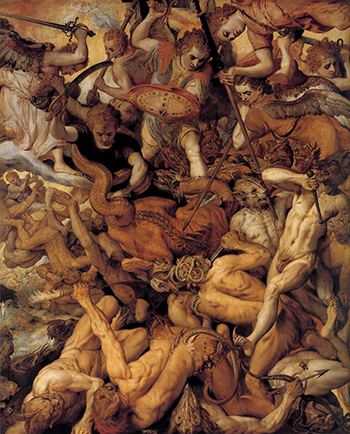 If you’re familiar with the History Channel’s hit television show Ancient Aliens, then you have been exposed to ancient alien theory. Interestingly, as this show’s popularity grows, so has awareness in the subject of the nephilim. Are these two subjects interconnected?

The Bible introduces us to the nephilim early in the book of Genesis, in chapter 6 verses 1-4:

Now it came about, when men began to multiply on the face of the land, and daughters were born to them, 2 that the sons of God saw that the daughters of men were beautiful; and they took wives for themselves, whomever they chose. 3 Then the Lord said, “My Spirit shall not strive with man forever, because he also is flesh; nevertheless his days shall be one hundred and twenty years.”4 The Nephilim were on the earth in those days, and also afterward, when the sons of God came in to the daughters of men, and they bore children to them. Those were the mighty men who were of old, men of renown. (NASB – emphasis added)

The term “sons of God” was translated from the original Hebrew, Bənê hāʼĕlōhîm (בְנֵי־הָֽאֱלֹהִים). This term literally means, “sons of God”, but is only used in ancient texts to describe a direct creation of God Himself, such as the angels. The only other direct creation of God was Adam. Ancient language and biblical scholars agree that the term as it it used in this passage is referring to fallen angels. Many translations of the Bible simply render these passages as “angels”, whereas others, such as the New American Standard Bible, read “sons of God”. Other passages using the same term, Bənê hāʼĕlōhîm, and derivations thereof, clearly refer to angels.

Job 1:6 reads, “Now there was a day when the sons of God (Bənê hāʼĕlōhîm) came to present themselves before the Lord, and Satan also came among them.” (NASB – emphasis added).

Job 38:7: “When the morning stars sang together and all the sons of God (bənê ĕlōhîm) shouted for joy?” (NASB – emphasis added).

In the pseudepigraphical work The Book of Enoch,  the fallen angels are referred to as the Watchers. Although the work is considered pseudepigraphical, many scholars believe that the Book of the Watchers in Enoch 1 was in fact authentic, and was written by the hand of Enoch. Evidence of this is presented in the New Testament book of Jude 1:14-15, where Jude quotes 1Enoch 1:9, and attributes authorship to Enoch himself:

Now Enoch, the seventh from Adam, prophesied about these men also, saying, “Behold, the Lord comes with ten thousands of His saints, 15 to execute judgment on all, to convict all who are ungodly among them of all their ungodly deeds which they have committed in an ungodly way, and of all the harsh things which ungodly sinners have spoken against Him.”

1Enoch describes the extraordinary account of the Watchers descending to Earth and deciding to take wives among the human women for themselves, thus provoking the Lord. These events correlate to the account in Genesis 6. The offspring of the illicit union between the fallen angels and human women are called the nephilim, or literally, giants. The Genesis 6 account goes on to describe in verse 12 that in fact “all flesh” was corrupted, which includes animals, and further justifies God’s employment of the global flood to destroy not only humans, but animals as well.

This is where the ancient astronaut or ancient alien theory comes into play. Also, known as paleocontact hypothesis and considered a pseudoscience, the idea was first proposed in earnest By Harold T. Wilkins in the 1950s, although similar themes and devices go back to the 19th century. Although the theory has many offshoots and varying ideas, the basic idea is that extraterrestrials visited earth at some point in antiquity, and made contact with humans. Most theorists believe that humans were either created or descended from these beings. It is also believed that the technologies employed by the ancient aliens were misunderstood as signs of divinity. These beings are often referred to as “the gods” by ancient astronaut theorists.

The idea was relegated to little more than fringe fantasy, until Erich von Daniken released his book Chariots of the Gods? in 1968. The groundbreaking book was the first of its kind to explore ancient cave drawings, carvings, and other early artistic renderings around the world depicting humans and non-humans alike participating in activities such as flying, space travel, the use of advanced technologies, and flying vehicles, all before any type of worldwide travel or communication existed. To theorists such as von Daniken, this is evidence of a worldwide inception of ancient aliens descending to earth, and sharing their advanced knowledge of flight, science, and other technology with early man.

Bible literalists who understand the very mysterious and abbreviated account in Genesis 6, see obvious parallels between the biblical account and ancient astronaut theory. However, sharp contrasts exist where biblical authority takes precedence. First of all, we believe that the Bible is the literal, inerrant Word of God. Therefore, it is no mystery how we came into being and who created us. We believe that according to Genesis 6, that fallen angels did descend to earth and interact with mankind. The Book of the Watchers in 1Enoch explicitly describes how these fallen angels infused mankind with hidden secrets of science, alchemy, herbalism, weaponry, and even jewelry. Chapter 8 of 1Enoch states:

1 And Azazel taught men to make swords, and knives, and shields, and breastplates, and made known to them the metals of the earth and the art of working them, and bracelets, and ornaments, and the use of antimony, and the beautifying of the eyelids, and all kinds of costly stones, and all
2 colouring tinctures. And there arose much godlessness, and they committed fornication, and they
3 were led astray, and became corrupt in all their ways. Semjaza taught enchantments, and root-cuttings, ‘Armaros the resolving of enchantments, Baraqijal (taught) astrology, Kokabel the constellations, Ezeqeel the knowledge of the clouds, Araqiel the signs of the earth, Shamsiel the signs of the sun, and Sariel the course of the moon. And as men perished, they cried, and their cry went up to heaven . . .

Using the biblical account of Genesis 6 as our authority, it becomes clear exactly how the ancient world was infused with such creatures and knowledge as is described pictorially on ancient cave walls, and carvings. The so-called “ancient aliens” are in reality, fallen angels. Believers in ancient astronaut theory state that these aliens created mankind; however, they mingled their DNA with mankind to create a race of terrifying giants called the nephilim. These illicit creations were an abomination to God, and served as the key reason for the great flood. The Bible states that all flesh had corrupted its way on the earth (Genesis 6:12) . However, Noah was found “pure in his generations”. This is an interesting passage, as it states nothing about Noah’s character or righteousness, but that his generations, or bloodline was pure, or uncorrupted with the acts of the fallen angels. Even at this early stage in the Bible, we see God’s plan for preserving the human race in order to bring about His Son, the Messiah through the line of man! Satan knew from the moment God declared that the seed of the woman would crush his head (Genesis 3:15), that if he could corrupt the blood of mankind, he could thwart the plan of God.

This is just the tip of the iceberg of the biblical account of fallen angels mating with human women and producing the nephilim upon the earth, and how it directly relates to the ancient astronaut theory. What is amazing, is that the subscribers to the theory of ancient aliens are typically those who reject the Bible, and who maintain secular views. Yet, it is astonishing that they are able to come to the same conclusions as those who study it in earnest – albeit they believe that fallen angels are really extraterrestrial aliens from the nether parts of the universe. This twisting of truth, and getting the focus off of the working of Satan, and onto the belief in space aliens being our creators or original teachers of technology and science, is the foundation of what some biblical scholars believe will serve as the great deception mentioned by Jesus in the New Testament. This subject is one of great debate and discussion, and one we will delve into in the near future.