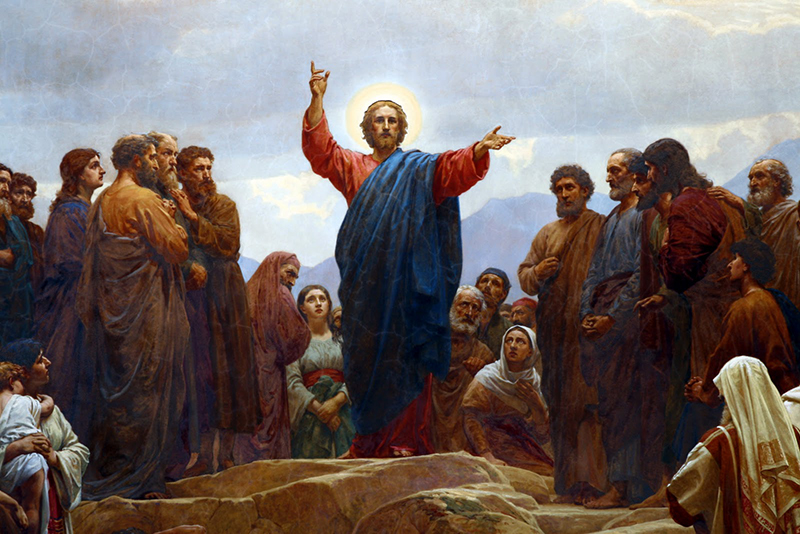 A response to Hebrew Roots:

One of the key passages upheld by Hebrew Roots apologists feature the words of Christ Himself in Matthew 5:17-18. Let’s take a look at this passage, and break it down so that we can see and understand what is truly being said here by our Lord. In its entirety, the passage is:

“Do not think that I came to destroy the Law or the Prophets. I did not come to destroy but to fulfill. For assuredly, I say to you, till heaven and earth pass away, one jot or one tittle will by no means pass from the law till all is fulfilled.

But before we delve into that….

First of all, let’s establish some language variants that we can glean from the original Greek, in order to understand fully which words mean what exactly. The term “law” in the passage above, is translated from the Greek nomos (νόμος). Strong’s concordance defines this word as follows:

νόμος nómos, nom’-os; from a primary νέμω némō (to parcel out, especially food or grazing to animals); law (through the idea of prescriptive usage), genitive case (regulation), specially, (of Moses (including the volume); also of the Gospel), or figuratively (a principle):—law.

Nomos is most often used describing the law of Moses, or the Torah.

This is in stark contrast to another word: logos (λόγος). Logos means authoritative speech, communication, or mandate. This is the term used in the Divine Expression, translated as “Word”, in the first chapter in the book of John:

And the Word became flesh and dwelt among us, and we beheld His glory, the glory as of the only begotten of the Father, full of grace and truth. – John 1:14

It should be evident at this point that the terms are different, and not interchangeable. Nomos is not logos, and therefore Christ is not the “nomos” made flesh. He is the “logos” made flesh. This distinction will be useful going forward as we explore more.

A third term we should give attention to, that is also errantly used interchangeably often times, especially among Hebrew Roots adherents, is the word “entole” (ἐντολή), translated as “commandment” or “precept”. Strong’s defines as follows:

This is also important to note – that nomos and entole are not interchangeable, and do not mean the same thing. The book of 1 John is a favorite go-to reference for Hebrew Roots followers, because of how many times John speaks of keeping the commandments. For instance:

Passages such as these are used as evidence of required continued keeping of the law of Moses. However, the word being used is “entole” and not “nomos”, which would be the appropriate word for law. Furthermore, John sums up exactly what he’s talking about:

And this commandment we have from Him: that he who loves God must love his brother also. – 1 John 4:21

John is referencing the new commandments issued by Christ, not the law of Moses. The very same word “entole” is used when Christ addressed this issue, and declared His commandments:

So to summarize, John exclusively uses the word “entole” instead of “nomos”; identifies in chapter 4 exactly which “entole” he is referring to; and we find the same “entole” issued by Christ in Mark as John referenced. To twist John’s words and claim he was referring to the law of Moses is an unacceptable molestation of the text.

Now that we have established these key differences in specific wording used, let’s explore the passage in Matthew referenced in the beginning. We will break down the passage in pieces and examine it:

Right here at the very beginning, it is established that Christ did not come to abolish the law. Many within the HRM community utilize the strawman argument that states that those of us who do not believe that we are to continue keeping the Torah are proclaiming that Christ abolished or destroyed it. This is clearly unscriptural, as evidenced by the words of Christ in this passage. He most certainly did not destroy the law of Moses. Rather, He came to do exactly what He proclaims in the next segment:

“I did not come to destroy but to fulfill…

So right here, Christ is establishing the difference between “destroy” and “fulfill”. There is a difference in our language today, why wouldn’t there be a significant difference at the time He said it? An empty cup that is filled with water becomes fulfilled. It does not become destroyed. Once again, the HRM argument that says we are stating Christ destroyed or abolished the law fails. If He destroyed it, there would be nothing for Him to fulfill! The next segment is the source of much misrepresentation among the HRM:

“For assuredly, I say to you, till heaven and earth pass away, one jot or one tittle will by no means pass from the law…

So right here, Jesus is proclaiming that the law is forevermore, as it was presented to Moses, and we are to follow it to the letter until heaven and earth pass away, right? If this was the end of His statement, then that would be a good analysis. However, it isn’t all He had to say. The remainder of the passage makes all of the difference:

“…till all is fulfilled.”

The entire passage hangs on this last segment. The “till” is a subordinating conjunction between two clauses that joins them together. The two clauses are interdependent. The jots and tittles of the law not passing away is not an absolute declaration. It is dependent on the subordinating conjunction “till”. Once whatever follows the “till” takes place, the primary clause can then take place. In this case, it’s the jots and tittles of the law passing. The subordinating conjunction can also be moved to the front of the sentence, and still connects the two interdependent clauses in the same manner. This would look like the following: “Till all is fulfilled, one jot or one tittle will by no means pass from the law”.

The heavens and earth passing away are not at all the focus in any way of the passage. This illustration is merely used as a guarantee of the law not passing in any way till all is fulfilled. Jesus is saying that until He fulfills what He came to fulfill, the heavens and earth would sooner pass away than one jot or tittle pass from the law. So it was established without question that the law was fully intact and fully in play TILL all was fulfilled. Jesus is proclaiming that the law isn’t fulfilled merely with His arrival on the scene. He has a mission to accomplish in order to fulfill it in its entirety. Until that mission is accomplished, follow the law as you always have.

So the question is then – did He fulfill the mission? Did the “till all is fulfilled” come to pass? If it can be established that Jesus cannot lie, and is incapable of falsehood, which obviously it can, considering He is the Son of God and is without sin, then answering this question is quite simple. Have jots and tittles passed from the law? If they have, and heaven and earth have not passed away, and Jesus is incapable of lying, then the only logical answer is yes.

Upon the cross, before giving up His spirit, Jesus proclaimed “tetelestai”, which translates into “paid in full”. This is an interesting pronouncement and without knowledge of scripture, could be easily overlooked. However, this phrase directly hearkens back to His promise in Matthew 5. He declared that He came to fulfill the law. Upon declaring “paid in full”, He was declaring the fulfillment complete. How do we know this? Shortly after His crucifixion, resurrection, and subsequent ascension, the temple was destroyed in 70 A.D. The Levitical priesthood dissolved, and the entire nation once under the law of Moses, scattered. This by far exceeds a jot or a tittle.

So if Christ cannot lie, and jots and tittles have passed from the law, we know that in Him, it is fulfilled!