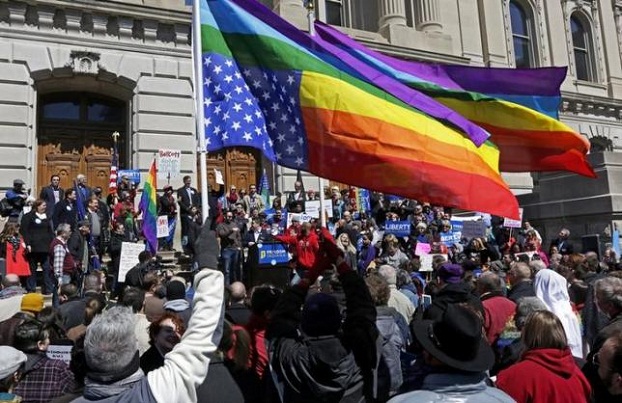 It’s typically not the aim of this blog to engage in the roiling cauldron of current social dialogue; however, the implications of the fallout in the wake of Indiana’s Religious Freedom Restoration Act (RFRA) signed into law by Governor Mike Pence last week demands addressing. Christians are clearly in the crosshairs of the social activists who decry the law, stating that it ushers in a new Jim Crow-esque era of discrimination and bigotry, this time featuring the gay community as victims of systemic persecution.

We won’t dwell on the fact that 19 other states have similar laws that essentially achieve the same thing; nor will we delve deeply into the actions that precipitated in congressional Democrats passing a federal version of the same bill in which President Bill Clinton signed into law in the early 90s. No, plenty of other sites and talking heads have covered this entirely.

This law, simply provides a defensive legal path for one to travel, if one claims that religious conviction precludes him or her from providing products or professional services to a group, function, or event that compromises their personal beliefs. This basic principle has always been referred to as religious liberty in the United States, and until now, hasn’t really been much of an issue – especially when compared to the rest of the world.

Previously, several similar incidents have occurred in which a Christian owner of a bakery, florist, and others refused to provide their services to a gay couple for their wedding, creating a firestorm. The social crusaders claimed that this was discrimination, and that refusing to serve a gay wedding was an illegal act. This is problematic on several levels.

First – ok, so you have the right to be gay – and in most places today, to get married to a same-sex partner. That’s your prerogative, and the exercise of your liberty to do so. Does my lack of engagement or promotion of your exercise equate to my oppressing you or preventing you from going forward with your plans? In the 80s and 90s, the mantra repeated from the activist community was “tolerance”. We were told to tolerate those who we may disagree with. That’s absolutely fine – providing that your actions do not deny others of their life or liberty, tolerate is something I can do. Somewhere in the early 2000s, the updated refrain was “acceptance”. Not only should you tolerate those who practice things you are opposed to, you must now accept them and their lifestyles. Today, the newest command is apparently “participation”. You are obliged to tolerate, accept, and even participate and advocate that which is in contrast to your deeply held moral or religious convictions. Meanwhile, Christians are barely even tolerated. Where’s the give and take? What happened to ‘live and let live’?

Second – does the shoe fit on the other foot? Should a Muslim caterer now be obligated under the penalty of law to provide a pork barbecue spread for a Christian family reunion? Would the activists demand that a gay sign maker be forced to provide signs to an anti-gay rally? What about a pro-choice feminist photographer being coerced under the threat of prosecution to photograph a pro-life rally? How odd it is that the defenders of the individual liberties of even liberal darlings are conservatives who take the position that no business or professional should be forced to engage in that which is abhorrent, grievous, or offensive to them. The people in the above examples should have every right, without molestation, to decline services for such functions. And in this same vein, Christians who do not want to participate in a gay wedding ceremony should have that same right.

Third – is it now being claimed by the leftist that one has a “right” to receive services from a private business? That’s an incredibly slippery slope. In America, we do not pay to receive our rights. We believe, as enshrined in our founding documents, that all men are endowed with certain unalienable rights. The right to free speech is self evident – the government could not go door-to-door and collect a “free speech tax”, for instance. Therefore, if it is my right to receive goods and services from your private business, then you do not have the right to refuse me for any reason. If you tell me that the cost of those services is $100, I can refuse to pay, because after all, receiving your service is my “right”. If you have a problem with that, then you are discriminating against my economic status. Perhaps I am too poor to afford your services, but if receiving them is my right, then I cannot be turned away.

How far do we want to travel down this road America? How much of our liberty will we continue to silently watch wash away in the ever-rising tide of perennially offended outrage? It is time for Christians to stand up for their convictions for a change, and rise up against those who would deny our freedom to worship as we choose, honor the God we serve, and live according to His precepts.